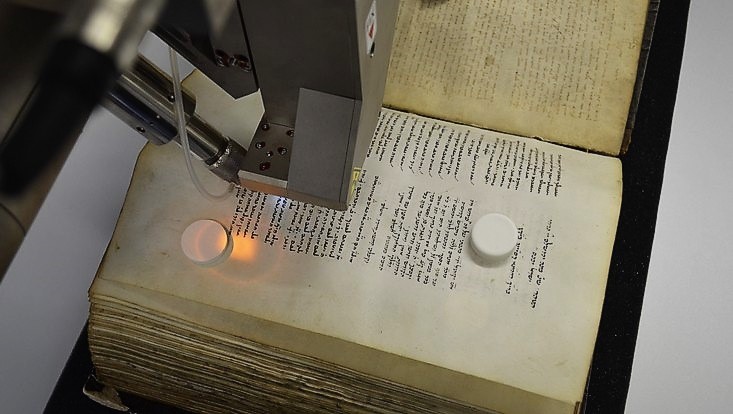 Written artefacts are material objects that bear writing in the broadest sense – from notation systems for language, music and other performative arts, to pictures, diagrams, maps or simply scribbles. Since the turn of the millennium, the study of written artefacts, such as manuscripts or inscriptions, has taken a quantum leap in terms of theory, methodology and the diversity of research materials. Traditionally, the study of written artefacts in the humanities has focused mostly on textual contents. In contrast, newer approaches take a holistic perspective and begin with the material object as such, thus integrating material analyses. This allows for novel insights into the history of writing cultures from the production of the first manuscripts and inscriptions approximately 5,500 years ago to handwriting in the digital age, as well as for elaborating cross-cultural, cross-regional and cross-epochal patterns through combining the expertise of various disciplines. On the one hand, the close cooperation between the natural sciences, computer science and the humanities allows us to reconstruct the cultural techniques involved in the production and use of written artefacts; on the other hand, this cooperation enables us to obtain information about the appropriate handling of such artefacts, which represent valuable cultural assets.

The Digital Lunch Seminar Series covers a broad spectrum of topics in the research of written artefacts. At CSMC and the Cluster of Excellence ‘Understanding Written Artefacts’, this research brings together over 40 disciplines from the humanities, natural sciences and computer science. The seminars are presented by pairs of researchers, each with their own methods and research questions about the objects they are dealing with. The seminars provide in-depth scientific knowledge on the respective topics and address all researchers within and outside the respective field of expertise.

After a short introduction to the topic by the chairperson, there will be two lectures of 20 minutes each. At the end of each session there will be time for discussion, questions and answers. If you are unable to attend one of the events, it is possible to obtain a video of the lecture from the respective speakers.

The chemical analysis of proteins and metabolites provides information about the biological identity of a written artefact as well as about natural or anthropogenic external influences. In this way, knowledge can be gained about the origin or history of the underlying plant material. Furthermore, meta-analyses provide additional information about the object’s prehistory. The data are collected with high-resolution mass spectrometers. In order to comprehensively exploit the complex data generated by spectrometric techniques, several bioinformatic approaches are applied. First, multivariate methods are utilised for the classification of the mass spectra of analysed samples. These methods are divided into unsupervised approaches, which are applied without further information, and supervised approaches using samples with known class memberships by which classification models are trained. Furthermore, mass spectrometric signals are identified that are significantly different between the groups of analysed samples. For this, statistical and novel machine learning methods are applied. The identified signals can be compared to databases to assign them to proteins and metabolites, respectively.

Marina Creydt studied food chemistry at the Hamburg School of Food Science (HSFS, Universität Hamburg), where she wrote her thesis on food profiling using high-resolution mass spectrometry. She heads the working groups on mass spectrometry and the ‘Metabolomics’ at the HSFS. Since April 2021 she has been the Principal Investigator of the research project ‘Mass Spectrometric Proteome Analysis of Written Artefacts’ in the Cluster of Excellence ‘Understanding Written Artefacts’. Marina Creydt’s main areas of work are: development of mass spectrometric strategies for food authentication (food profiling) and authentication of artefacts (artefact profiling) with metabolomics and proteomics approaches.

Stephan Seifert has been working as a junior professor for Chemometrics of Complex Material Systems at the HSFS and in the Cluster of Excellence ‘Understanding Written Artefacts’ since March 2020. His research is located at the interface between method development/validation of chemometric and bioinformatics methods and their practical applications on spectrometric, spectroscopic, and sequence data in various research areas. Professor Seifert studied chemistry at Humboldt-Universität zu Berlin and received his PhD in the research group ‘Nanoscale Optical Spectroscopy’ on the classification and characterisation of pollen. From 2016 to 2020, he was a postdoctoral researcher at the Institute of Medical Informatics and Statistics at Christian-Albrechts-Universität zu Kiel, developing and validating machine learning approaches for the study of chronic inflammatory skin diseases such as neurodermatitis and psoriasis.

Notebooks – Identifying Disiecta Membra on the Basis of Palaeography, Codicology, and Textual Criticism

Aristotle’s collection of treatises on logic, commonly known as the Organon, has been passed down to us in around 150 Greek manuscripts from the 9th to the 15th century. Several Organon manuscripts preserve the entire collection. Others transmit only a part of it. In some cases, the scribes deliberately copied a specific portion of the collection. On another occasions, codices display marks of physical damage, unmistakably indicating that their incomplete content is due to material losses. Most of the detached folios and quires that came down to us from broken manuscripts of the Organon were never recovered and could be lost forever. Occasionally, however, they survive as disiecta membra in one or several unrelated volumes. Our paper probes an Organon manuscript copied around 1442 by the scholar and churchman Theodore Agallianos, whose fragments are preserved in codices from Leipzig, Paris, and Vatican City. The proposed study will be undertaken from an interdisciplinary perspective, including Manuscript Studies, Palaeography, Philology, Textual Criticism, History, and Ink Analysis. In the last two decades, the combination of UV-vis-NIR reflectography and X-ray fluorescence (XRF) spectroscopy has become the standard way to characterise and differentiate inks. Its application to the study of inks from Vat. gr. 1777, Par. 1919, and Rep. I 68a exemplifies well how such analysis complements the observations made by scholars, and the need for close collaboration between the different disciplines to fully understand the history of a manuscript.

Olivier Bonnerot studied Chemistry at the École Nationale Supérieure de Chimie de Paris (MSc in Analytical Chemistry, and MEng. in Chemistry). He then did a PhD in Mediterranean Archaeology at the University of Cyprus on the study of materials from wall mosaics before joining the Bundesanstalt für Materialforschung und -prüfung (BAM) to analyse inks as part of the collaboration between the BAM and CSMC. Since June 2022, he is the Principal Investigator of the project ‘From Carbon to Iron: Evolution of Greek inks from Hellenistic times to Late Antiquity’ at the Cluster of Excellence ‘Understanding Written Artefacts’.

José Maksimczuk studied Classics and Literature at the Catholic University of Buenos Aires. Between 2014 and 2018, he did a PhD in Greek Studies at the Catholic University of Leuven (Belgium). He joined the Cluster as a Research Associate on the project ‘Polygenetic manuscripts of Aristotle’. Since October 2022, he is the Principal Investigator of this project (together with Christian Brockmann). He is also the spokesperson of the Research Field on ‘Notebooks’.

The diversity of written artefacts in terms of material support is huge and it includes clay tablets, stones, metal, ivory, parchment, palm leaves, paper, et cetera. Among these, mineral- or rock-based supports have usually been considered as ‘forever-lasting’ messengers and therefore have played a critical role as a means of public communication and storage of knowledge.

Different types of natural inorganic non-metallic support will be discussed from the point of view of their use by different agents as well as of their mineral-phase composition and analytical materials-science methods for fingerprinting them. A showcase of inscribed gems from the collection of the Museum für Kunst und Gewerbe, Hamburg, to holistically study rock-based written artefacts will be presented.

Kaja Harter-Uibopuu studied Ancient History and the History of Ancient Law at the University of Graz, where she received her PhD in 1996. After working as a senior scientist at the Austrian Academy of Sciences in Vienna, she came to the Universität Hamburg as a Professor for Ancient History in 2015. Her research interests include Greek and Roman Epigraphy, Ancient Greek Law, as well as Funerary Customs in Greco-Roman Asia Minor.

Boriana Mihailova graduated in physics from Sofia University in 1989 and received her PhD degree from the Bulgarian Academy of Sciences in 1997. Since 2005, she has been Professor of Crystallography at the Universität Hamburg. Her main research interests are solid-state spectroscopy, phase transitions, ferroelectrics, complex hydrous silicates, disordered silicates, biomaterials, and novel methods for non-destructive mineral characterisation.

Automatic visual-pattern analysis has become increasingly important for scholars in the humanities as the number of digitised manuscripts has grown exponentially. Even clearly defined tasks such as image categorisation or finding specific visual elements have become very difficult, time consuming, and even impossible in some cases. On the other hand, rapid advancements in machine learning and computer vision provide an unprecedented opportunity to automate the analysis of visual-patterns in digitised written artefacts. This automation not only saves time and effort but can also provide answers which otherwise might be beyond reach of manual approaches. Thus, we can learn more about the structure of writing supports, for example to identify technologies and sometimes even the papermaking sieve-mates; to find the same patterns in large sets of images or textual peculiarities from the large number of digitised books; to identify similar iconographies, styles, as well as scribes’ and artists’ hands; or to find particular documents which are written by the same person (or not). In this lecture, we will present a number of Tibetan written artefacts, such as the selected legal documents from the Mustang Archives and a set of ‘Initiation Cards’ used in numerous Tibetan rituals. Beyond the stories of their provenance, we will also reveal some excerpts from scribes, artists, and contemporary people.

Agnieszka Helman-Ważny is presently employed by the Federal Institute for Materials Research and Testing, Division 4.5 (Analysis of Artefacts and Cultural Assets) in Berlin. She is also a Principal Investigator at the Cluster of Excellence ‘Understanding Written Artefacts’ and Professor of Social Sciences in the Department of Book and Media History at the University of Warsaw. Her publications include monographs and articles on the history of the regional production and usage of paper and books in Asia, including The Archaeology of Tibetan Books (Brill, 2014), and The Mustang Archives: Analysis of handwritten documents via the study of papermaking traditions in Nepal (Brepols, 2021, co-authored with Charles Ramble).

Hussein Mohammed received his MA degree in informatics engineering from the University of the Algarve and continued his work on shape detection and recognition as a Research Associate at the computer vision lab at the same university. In October 2015, he came to Universität Hamburg to continue his research in the field of computational document analysis. In March 2019, he received his doctoral degree in computer science for his work in computational analysis of handwriting styles. Since July 2019, he is a Principal Investigator at the Cluster of Excellence ‘Understanding Written Artefacts’. His main research interests are pattern recognition, machine learning, and computer vision.